What Melinda Gates got wrong about contraception

A few days ago, Bill and Melinda Gates published their annual letter –a popularized annual report, really- and, along with it, a few more essays, each focusing on different aspects of their work. In one of those, which was published by Fortune, Melinda wrote about contraception or, rather, about the dissemination of contraceptives in countries of the developing world -what she herself considers as her life’s work (the Gates Foundation is part of Family Planning 2020, a coalition of government agencies working to bring contraceptives to 390 million women all over the developing world).

Which is all very well, especially since “No country in the last 50 years has emerged from poverty without expanding access to contraceptives”, as they themselves note in their «Dear Warren» address. Except that, in the middle of her Fortune essay, Melinda leaves behind her the developing world, with its trying life conditions and horrifyingly lacking public health system, and shares, as a privileged female citizen of the West, the following insight:

It’s no accident that my three kids were born three years apart—or that I didn’t have my first child until I’d finished graduate school and devoted a decade to my career at Microsoft. My family, my career, my life as I know it are all the direct result of contraceptives.

Her goal, of course, is to (correctly) argue that women’s financial empowerment is inextricably linked to their ability to avoid getting pregnant every two years during their whole reproductive life. However, contraception means a completely different thing in the USA than it does in Kenya and, by equating the two Melinda arrives at a erroneous –even dangerous, if I may say- conclusion for the sake of us all.

Contraception here and there

“A few years ago” Melinda says “I met a woman in Kenya who had just started a small business sewing backpacks out of denim scraps. She hoped this new income would help her give her three kids a better life, but she was very aware that her ability to keep the business at all depended on her ability to delay her next pregnancy.”

What is implied but nowhere clearly articulated in the above quote is that, in the developing world, the real issue is not that women do not have access to mechanical and/or pharmaceutical means of contraception. The real issue is that, because they are seen as owned by their men and as lesser beings to boot, those women do not have, apart from these very means, any other way to claim control of their bodies and/or of the number of children they will get to bear. The Kenyan entrepreneur’s problem is not that she can’t help getting pregnant as soon as her husband touches the hem of her dress. Her problem is that her position in her family and her society prohibits her from simply refusing, with a mere “no”, to consent to yet another pregnancy. Her wish to stop bearing children is not enough to lead to a mutual understanding between her and her master. Which means that her only hope is to build up a hormonal barricade.

And Melinda clearly knows that. 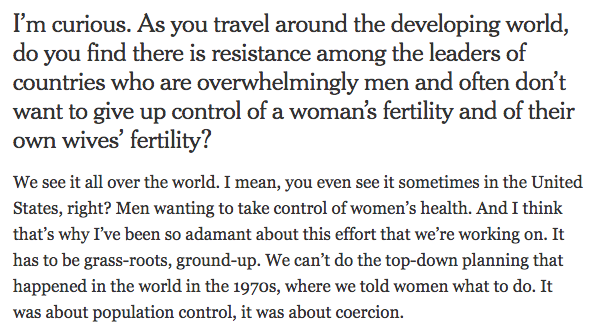 It’s a shame, then, that the target audience for her essay is coming from the West. Where, under normal circumstances, couples who can boast an average level of mutual understanding and of reproductive health knowledge are not doomed to a lifetime of diaper changes, but can fairly successfully stop proliferating well before or soon after their third child is born, even without using the pill (42,1% of US women do not use any kind of pharmaceutical or mechanical means of birth control. The percentage of families requiring a minivan for the morning school run is much lower in the country).

At this part of the world, 1, 2 or 3 children should not constitute a hindrance for the professional development and financial stability of women (nor of anyone else, for that matter).

In other words: whether a woman will succeed on building the career she’s dreamt of or whether she will have the ability to support her family and herself, should not depend upon any kind of military-style timetable, like the one Gates proposes. Not just because military-style timetables do not always work well in family planning, nor because not all families have the same goals and needs. But mainly because, in every part of the world, job markets and social welfare systems should ensure that 1, 2 or 3 children cannot derail their parents’ professional futures.

By writing «My family, my career, my life as I know it are all the direct result of contraceptives”, Melinda actually says: “If you want to succeed –professionally, creatively, financially- you should grow your family based on the strict managerial logic you would use to organize any multinational corporate giant. If you choose to let nature or any amount of sentimentality creep into your scheduling, then you are bound to get what you deserve, aka you will remain unfit to participate, under equal terms, in today’s production system and will be inevitably and irrevocably dependent, Kenya-like, on your husband and master (whose professional development won’t be in any way compromised by the number of his offsprings).” She transfers, so to speak, all responsibility for women’s professional advancement to themselves, letting all political and social constitutions handily off the hook.

To be a woman

Not that she’s lying in any sense. It is yours and my reality that she describes. It’s just that Melinda is not working to corroborate reality. She is an “impatient optimist working to reduce inequality” in the world.

Which, in the developing world, can be –at least partly- reduced by giving women access to means of contraception. Inequality in the West, though, is -for now- a different kind of beast. To say that women need contraceptives in order to make their dreams come true is rather contradictory, in terms of equality: what you are really saying is they need to become a little bit more like men.

An equal job market in the West would offer support and flexibility to both working women and men who wish to devote a part of their life to raising kids.

It would offer incentives for businesses to provide employees with much needed parental leave, but also to put in place innovative frameworks which will lighten the burden of childcare.

It would not penalize small entrepreneurship, flexible work and alternative employment models, but it would give everyone, regardless of their gender, a chance to show how creative and productive they can be when they are able to choose when, where and how they are going to work.

It would ensure access to cutting-edge tools that allow businesses and professionals to work and collaborate remotely and it would respect the fact that traditionally female modes of work (frequent changes and transitions, bursts of productivity, constant interruptions, flexible schedules) constitute a completely valid and sustainable path to professional advancement.

Or, in the words of the ever cynical but fair Penelope Trunk: “Let’s celebrate shrewd and crafty workarounds. Let’s measure results instead of process. That’s how we’ll crate equality in the workforce.”

This site uses Akismet to reduce spam. Learn how your comment data is processed.